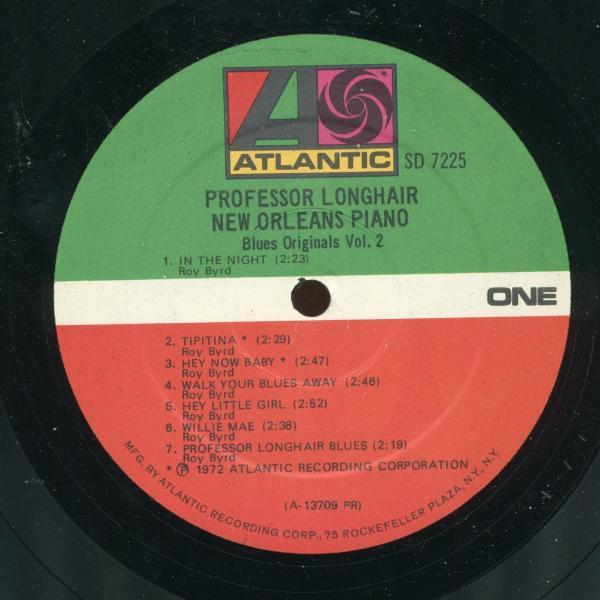 When this album came out, the recordings were already 20-25 years old. The released tracks previously existed as 78 RPM 10” discs. When music is that old, it is hard to imagine how it could be either ‘cutting edge’ or influential upon re-release, but with “New Orleans Piano”, that is exactly the case.

Roy Byrd (aka ‘Professor Longhair’) was a New Orleanian (born in Bogalusa) who hardly ever left the city he loved. New Orleans was like that. In many ways, it still is. New Orleans is self-contained, with traditions all its own. If you lived there, you just accepted the fact that it functioned as a swirling vortex that keeps its own on the inside and repels outside influences. Even Louis Armstrong hated the idea of leaving, and would have spent his entire life there if he didn’t feel the pull of his previous boss and mentor, King Oliver. As a native, Byrd was a living representative of the city, having absorbed those traditions much like thousands of musicians before and after. The difference, though, was that Byrd put a unique spin on those traditions. No single human being has ever done a better job of embodying the sound, the feel, the culture and even the geography of New Orleans. You can feel the rolling river in his left hand, and hear the cultural mix of the French Quarter in his hoarse yodel. New Orleans has way more than its share of characters and musicians, but Professor Longhair looms like a giant in their midst.

To paraphrase John Goodman’s character in the TV show ‘Tremé’, “Mardi Gras in New Orleans” might as well be the national anthem for a city that barely resembles the country to which it belongs. New Orleans is a place totally unto itself, and Professor Longhair is an artist totally imbued in that place. This music could not have been created anywhere else in the world. Jazz, the Blues, R&B and boogie with a rhumba beat are rendered into a perfect gumbo. The precise three-beat pattern of Byrd’s left hand suggest a precursor to Bo Diddley’s rock and roll rhythm and his inimitable growl/howl of a voice practically forces you to smile. You can even hear traces of ska in songs like “Willie Mae” and “Walk Your Blues Away” (Early Jamaican music was a direct product of New Orleans’ radio broadcasts and recordings). Both Dr. John and Allen Toussaint have defined themselves as inheritors of his grand tradition. From “Tipitina” to “In the Night,” from “Hey Little Girl” to “Hey Now Baby,” there’s a lot of crucial stuff here, but the most important characteristic is that it is fun, and meant to be played loud while you dance and sing along. Turn it up.