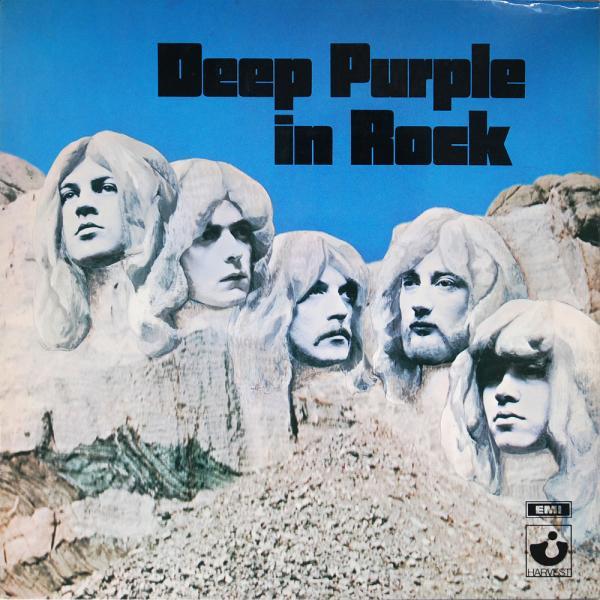 I take the fact that this album causes me to laugh out loud as a sign that I am not one of its best defenders, nor am I inclined to foster the taste profile that it takes to enjoy “In Rock” at face value.

This album is so utterly lacking in subtleties and so full of pretentious posturing that I can hardly believe there is anyone who does take it seriously. That being said, I must admit that, for better or worse, so many bands have influences that trace back to this exact point in time, where guitar histrionics meet vocal theatricality at the crossroads of thunderous overplaying.

Every time a hair metal band vocalist screams in falsetto while the lead guitarist goes ‘widdly-widdly-wee’ on his guitar, their roots are showing. Deep Purple represents everything that I eventually came to despise about glam-meets-metal corporate rock of the 1980’s, but I must laud them with credit for having the wherewithal to invent a genre, no matter how despicable the ultimate influence-ees may be.

Now, I can be a hater with the best of them, but to deny Ritchie Blackmore’s abilities as a monstrous riff machine would be ignorance of the highest order, or to demean the pitch-perfect three-octave range (!) of Ian Gillan would only prove my philistine disregard for obvious talent. Just because you can do something, though, does not necessarily mean that you should. In my opinion, great music is made when the musicians convey talent and wisdom simultaneously. As I see it, the point is to cultivate a sense of intelligence and artistic insight, while performing with competence. Apparently, though, Deep Purple could not care less about what I might think.  In June 1970, the corpse of the Beatles was still warm, but Deep Purple felt no allegiance to the past, and they set off on a path that demanded an entirely new set of criteria for appreciation.

If it were not for Deep Purple, it would be impossible to imagine the eventual rise of bands like Guns ‘n’ Roses, or Slayer. Some (including me) may argue that to be the point, but regardless of your opinion about the album’s descendants, “In Rock” marks a fork in the road where you had to choose what qualifications you feel are necessary for greatness. If your inclination includes words like “tasteful”, “restrained” or “intelligent”, then you went left. If, on the other hand, you use words like “awesome”, “intense” or “brain-melting” to describe your favorite music, then you are probably really pissed off at me right now, and yes, you went right at the fork.

Those two divergent schools of thought saw the future of rock and roll in very different lights, and as proven by subsequent events, “never the twain shall meet”. By definition, Deep Purple represents a significant change in the rules for what constitutes greatness, and despite my own inclinations to giggle whenever Ian Gillan breaks a glass in my living room, I must respectfully tip my hat and turn up the volume until my brain melts. Widdly-wee!!!