Jethro Tull: Thick as a Brick 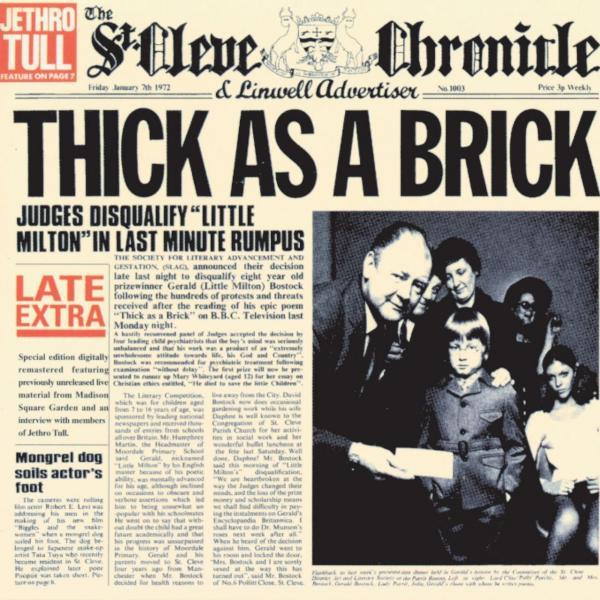 Jethro Tull: Thick as a Brick

This is such a remarkable piece of art that it is hard to appreciate it in the manner that Ian Anderson intended.

After releasing Jethro Tull’s previous album, “Aqualung,” critics almost unanimously reviewed it as a ‘progressive’ ‘concept’ album, which Anderson thought was ridiculous, because he had no conceptual structure in mind. For a lark, he decided that it would be fun to create his next album as the mother of all concept albums, one long unending piece of progressive music with all the trappings of a ‘serious’ album, but with a chunk of Monty Python-esque inspiration.

He came up with the idea of crediting the lyrics to Gerald “Little Milton” Bostock, an atheistic, malevolent, prematurely sexually active eight-year-old with a dark view of humanity. Anderson took credit for putting his ‘poem’ to music. To further the humor, the album itself unfolded to reveal a 12-page small-town newspaper, with articles about Little Milton, advertisements, articles and announcements, with a children’s connect-the-dots that revealed a centerfold model, among other humorous oddities. The ‘poem’ appeared on page 7, but all of this luscious artwork was destroyed by the CD era.

Anderson claimed the album was intended as a spoof of progressive music, stating that “Thick as a Brick” was to Emerson, Lake and Palmer what the movie “Airplane!” was to “Airport”. So, if you didn’t notice it the first few dozen times around, then you should now appreciate “Thick as a Brick” as a total laugh riot…or not, but you can still enjoy the album as a creative exercise in progressive rock, with an occasional tongue-in-cheek inside joke.