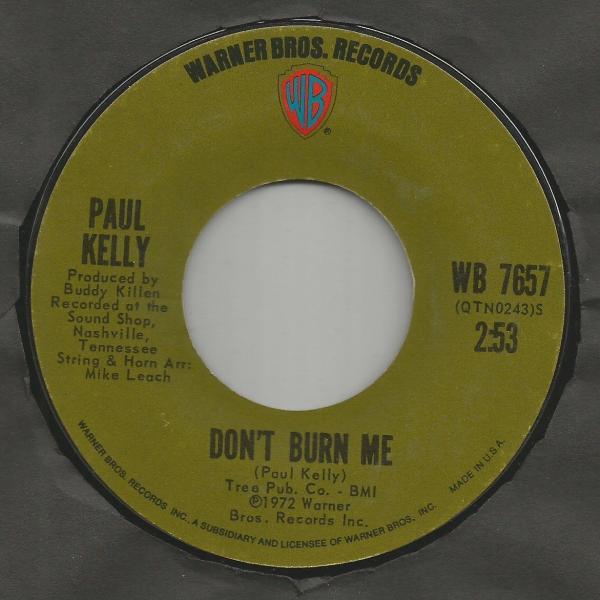 If it was ever really a battle at all, it was over before it began. Paul Kelly’s incredibly gorgeous album, “Don’t Burn Me” not only went nowhere but disappeared entirely some time soon after its release.

At pretty much the same time, Al Green released the stunning “Call Me”” and it flew to number one. To this day, Al Green is (rightfully) lauded, but Paul Kelly is not even part of the conversation. He can’t Be, because nobody remembers him. Do you know anybody who even knows that he once existed? Are you aware that his output, at least at this point in time, genuinely rivals Al Green regarding consistency and soulfulness? Now, don’t get me wrong. Few people could love Al Green’s music more than me. I have his catalogue committed to memory from total love, and I remain a fan to this very day, but poor Paul Kelly never even stood a chance. Historically speaking, it doesn’t help matters that an (also excellent) Australian artist with the same name accrued enough fame later in the decade to gain name recognition in America, something that never happened for an American with the same name. Nowadays, if you search for ‘Paul Kelly’, it’s more than likely that the Australian songwriter will come up, pushing the soul artist even further into oblivion.

Despite his perceived obscurity, Paul Kelly had his fifteen minutes of fame, and then some. He had a few regional hit singles (“Stealing in the Name of the Lord”, “Dirt” and “Don’t Burn Me” had regional success) and he also provided album filler to The Staple Singers and Karla Bonoff. Considering that his career lasted for decades, though, that isn’t very much, which makes this album all the more extraordinary. Song for song, “Don’t Burn Me” is a definitively great example of mid-seventies soul music.

The album opens strong and it never once subsides. For me, it’s almost impossible to not conjure the spirit of Al Green because the songs have that same gentility of spirit and production that suggests the work of Willie Mitchell. This is classic soul, recorded in Nashville with some of Memphis’ finest musicians, including Reggie Young, Chips Moman, Tommy Cogbill, Bobbys Emmons and Wood and the rest of the American Sound Studios team. It walks the line between lover-man soul and southern Gospel with incredible grace and I will state unequivocally that you will love this album, if only you get the chance to hear it. Before the days of digital reproduction, you may have seen the vinyl album selling for hundreds of dollars per copy, but digital downloads are now available, finally making it both possible and affordable to enjoy the deeply satisfying “Don’t Burn Me”.

Come lay Some Lovin' On Me

(You Bring Me) Joy

I Wanna Get Next To You

Wrapped Up In Your Love

My Love For You Won't Die