The Beatles: Something New 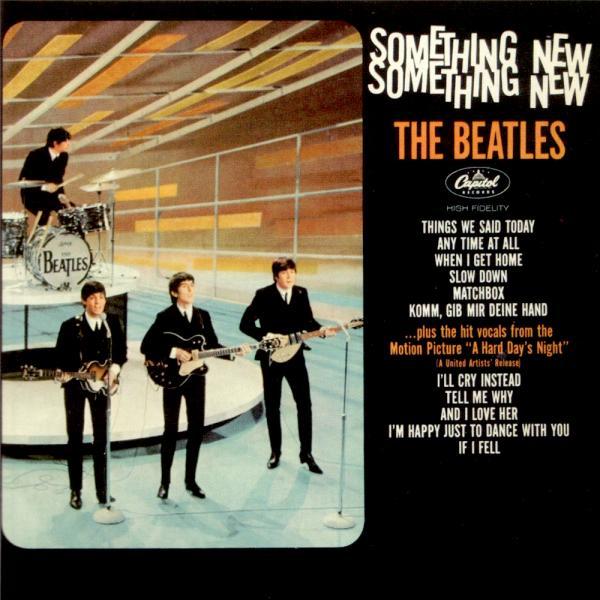 The Beatles: Something New

Top 500 of the Top 40 Album #9 - SOMETHING NEW – THE BEATLES July 1964 - #2 On previous entries, I’ve already bemoaned Capitol’s self-proclaimed license to invent and/or reinvent Beatles material to their own liking, usually with no concern whatsoever for the artist’s intentions. They created some incredibly inept packages, but all of them still managed to retain greatness simply because of the content.

Few, if any, though were as boneheaded as Capitol’s third concoction, unimaginatively entitled “Something New.” I am not privy to all of the legal ramifications that must have taken place regarding rights to releases of Beatles songs in the United States, but I do know that Capitol had their hands full dealing with small mom and pop’s like Vee-Jay and Swan. Now, it appears that due to ignorance, they also managed to screw up the right to claim the music from “A Hard Day’s Night.” As I said, I don’t know exactly why or how this happened, but my guess is that the Beatles’ manager Brian Epstein negotiated rights with United Artists, the company responsible for distributing the film, before they hit it big in America.

Once again, Capitol found itself behind the eight ball. The Beatles were easily the best selling artists in the label’s history. Here they were with brand new product – their best yet – and a full-length movie to promote that product, virtually guaranteeing that it will be one of the best selling releases of all time, and Capitol missed the opportunity to claim rights to the soundtrack. United Artists owned rights to all songs used in the film, so they released an album containing eight new Beatles tracks, fleshed out with orchestrated, non-Beatle versions of those same songs.

Capitol somehow finagled a deal that gave them the ability to release five of the eight songs on their own album, less “Can’t Buy Me Love,” and the title track, which were both already released as singles anyway, and, oddly, “I Should Have Known Better”. Thus, the Beatles had two albums released in American virtually simultaneously, with five of the tracks redundant on each release. Bearing the name of the movie on the album cover, the United Artists soundtrack launched to #1, while Capitol had to settle for the #2 spot.

Of the two, “Something New” is the better product, for the simple reason that it consists of Beatles music without any orchestral filler, but Capitol still managed to get seriously stupid by skipping viable song choices (like any of the three listed above, for instance), instead padding out the paltry eleven-song collection with the German version of “I Want to Hold Your Hand” – as the last track on this quite American album. Obviously, there was room, so why not add “Sie Leib Dicht,” while you’re at it? If you’re going to be stupid, can’t you at least be consistent? I don’t even want to discuss the thought process at work here any longer, because it is unforgivably dumb, but it’s what we had, and it was great anyway, because it was the Beatles. 1) I’ll Cry Instead

9) I’m Happy Just to Dance with You